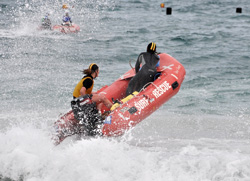 IRB racing is the fast paced, extremely competitive motor sport limb of surf life saving competition. With the thrills and spills that come from racing in surf all over Australia, being part of the Scarboro IRB racing team is sure to excite even the most seasoned adrenalin junkie.

The competition format consists of 5 races:

The driver and crew launch the IRB from the beach, negotiate the wave zone on the race to the front turning buoy, the crewperson dons a tube, dives from the IRB, swims 25 metres to the tube patient buoy, hooks up the patient, they swim back to the waiting IRB, once the crew and patient are back on board, the IRB rounds the front buoy and then races back to the beach. Upon hitting the beach, the driver exits the boat and runs up and over the finish line.

Scarboro has won the State title in this event three years in a row and are the current state champions.

The driver and crew launch the IRB from the beach, negotiate the wave zone on the race to the front turning buoy, where it performs a 360 degree turn around the buoy and proceeds to the middle patient pick up buoy where the first patient has clasped his or her hands together above her head, the crewman leans out on the left side of the IRB placing his left arm through the patient’s arms and pull them into the IRB while it is still very much on the move, and the IRB returns to shore.

Once back to shore, the first patient alights with the driver. The driver sprints up the beach and runs around a marker while the crewman is busy turning the IRB to prepare for the second leg, the driver boards the IRB, re-starts the engine and the IRB again negotiates the wave zone on the race to the front turning buoy, rounds the buoy, and proceeds to pick up the second patient who is waiting at the patient buoy and then IRB races back to the shore. Upon hitting the beach for a second time, the driver exits the boat and runs up and over the finish line.


Often referred to as the ‘dash for cash’ event: this is a straight out race from the beach, a quick turn around the front buoy, proceed to the patient pick up buoy, get him or her in the boat and get back to the beach. Upon hitting the beach, the driver exits the boat and runs up and over the finish line. This event is typically over in about a minute from start to finish, when you consider that the buoys are normally at least 120 metres from the shore, you begin to understand how fast this race really is.

This is an all in event, where the four events above are all combined into one event, with each leg being conducted by different driver and crew. It is a great fun way of finishing the day’s competition.

Be Part Of Our Success

As noted above, the team has had great success in the past, being both Australian and State champions. In recent season we’ve competed in National Titles in QLD and Tasmania.

The Club has got right behind the team and we have an impressive line up of new IRB’s and motors to give us the best chances of success on a national level. T

Interested in becoming one of the Scarboro IRB crew?

If you would like any further information, please contact the Scarboro IRB racing team captain and coach here.