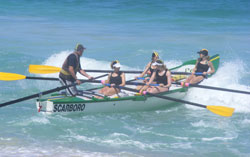 Our boat teams use the highest quality surf boats and oars on the market. They are made with the durable carbon fibre weighing up to 210kg. Surf boats were originally made as a rescue device, but now surf clubs use them for racing purposes only. All our club boats are named after life Members.

Our boats regularly compete on most of our WA metropolitan beaches stretching as far south as Albany and far north as Broome. Teams also have competed also at Manly and Kurrawa (where the Aussie Titles are held). There are 4 rowers in each boat and a sweep (steering the boat). Teams train in front of the club on calm days and on the Swan River and Hillarys Marina when the conditions are rough.

Training sessions for our rowers can be 4-5 times a week in the water and at the club gym as well as doing time trials on the Ergo rowing machines. You will need to be able to work hard in a team and be committed to the training sessions early mornings and late afternoons. Our teams are very consistent in competition and are always on the lookout for strong male and female rowers.