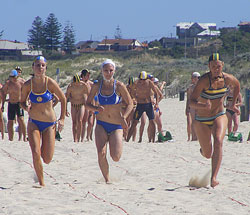 Scarboro SLSC Beach Sprinters train up to 6 sessions a week in a squad that is a combination of our members and other clubbies from along the coast. Scarboro SLSC has a successful beach squad with a number of Australian Champions. They also compete outside the lifesaving competition schedule in sprinting in competitions run by WA/Australian Athletic bodies.

The Beach Sprint is run over 90m (70m for Masters & U11-U14) on the beach. A similar design to that of a track run, it has lane ropes laid out on the sand with competitors digging their own blocks in the sand to start in.

The beach relay is comprised of 4 runners who each run a 90m (70m for Masters & U11-U14) leg each. A rubber hose is used as the batton and unlike track relays, the batons are changed in a face to face position.

Flags is a tactical event with competitors lying belly down in the sand, hands on wrists and ankles touching. When a whistle is blown the competitor must get up off the sand, turn the opposite direction and run 20m (15m for Masters & U11-U14) to dive for a hose in the sand. There is always at least 1 less hose than the number of competitors and who ever does not retrieve a hose, is eliminated.

The 2km beach run is held on sand and other than ensuring that they run around designated flags, competitors can choose whether or not to run on wet or dry sand.

The “No Break” rule applies to all these events, the same as Athletics. If you break you are out.

Become Part of Our Success

Scarboro SLSC has a very credible name in the beach arena Australia wide.